A TOUCH OF KLEZ
ALISON JAMES 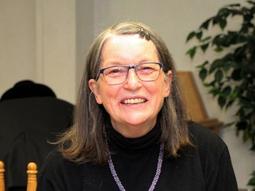 Alison began her musical adventures as a reluctant piano student and very keen recorder player.  In high school she discovered the flute and was soon accepted into the orchestra.  As an arts student in college she learned to play guitar, taught classical guitar to beginners and became swept up in the folk music movement.

After qualifying as a school teacher, Alison taught elementary school music, and led choirs, Orff and recorder groups both in Alberta and in Ontario.  When the school she worked for purchased a grand piano, Alison discovered the instrument was not so bad after all.  She then studied piano and took some voice lessons from a wonderful teacher, Irene MacLellan, at the Royal Conservatory in Toronto.  She also studied harmony with William Andrews.  With various teachers she also studied counterpoint, solfège, Dalcroze eurythmics, and Kodaly instructional methodology - all great fun.

Since coming to Ottawa, Alison has participated in various musical activities, playing keyboard at various retirement and nursing homes, and with the Ottawa Simcha Band.

A Touch of Klez is Alison’s first venture into klezmer music and she is loving it.