A TOUCH OF KLEZ
ERIC ELKIN 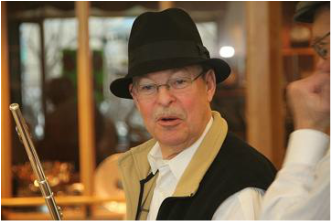 A reluctant piano student at age 11, Eric fell in love with the unique tone and timbre of the silver flute first heard live in a dance band at a Laurentian resort during his 14th year. After a year of lessons with that same flutist he qualified to enter the high school band program, eventually achieving 1st chair of the flute section by grade 11. That summer he toured Norway, Sweden and Denmark playing 1st flute and piccolo with the Montreal Junior Symphony.At McGill University Eric played one year with the McGill Concert Band but focused on his studies to graduate BSc in 1966 and enter medical school at the University of Ottawa the same year. The flute remained in its case for most of the next 20 years until the start of the Jewish Community Concert Band in the 1990's. At his wife Molly’s encouragement he joined, playing with them for several years.
Eric became a member of Haze Wainberg's amateur klezmer group which she founded in 1998. He has not looked back, enjoying every practice, show, concert and charitable fundraiser the band plays.
After 40 years in family medicine, Eric is looking forward to closing his office practice within the next few years and have more time for music.