A TOUCH OF KLEZ
ERNIE BRODO 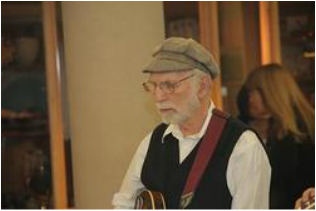 Irwin (Ernie) Brodo, our mandolin player, is a retired research botanist, having spent his career studying the taxonomy of lichens at the Canadian Museum of Nature. He began playing mandolin at the age of 11 in New York City, where he grew up, later learning guitar and violin.In high school and college, he played mandolin in a folk-jazz group called Three Plinks and a Plunk(two ukes, a mandolin and a guitar). The guitar player did all the vocals, so Ernie only started singing seriously as a member of the choir in the City College of New York (CCNY). These were the days of Burl Ives, the Weavers and The Travelers, however, so anyone with a voice and a guitar felt drawn to the folk idiom. It wasn’t long before Ernie was performing as a folk singer at various university gatherings.

All that changed in 1968. To illustrate a talk on Chassidism by his wife, Fenja, Ernie played some Chassidic tunes on his mandolin. Others in the Philosophy Group also played instruments, and so the Chassidic Chamber Group of Ottawa was formed. This group performed from 1968 until 1989. Meanwhile, Ernie was a member of the Ottawa Choral Society from 1967 until 2010, and a voice student of soprano Kathryn Palmer from about 1985 until 1995.
He now sings with MusicaEbraica, a small choir specializing in Jewish music.

​When ATOK was in its formative years, Ernie was asked to join. He also contributes a vocal or guitar accompaniment to occasional band performances, but mandolin remains his main instrument. Workshops with Eric Stein at KlezKanada have given him new techniques and challenges, as well as inspiration, even after 65 years of playing.